On Friday, July 10, 2015, the worldwide music business broadly agreed on something.

Having consulted on behalf of 1,300 record labels, worldwide trade body IFPI launched Global Release Day (GRD), which united the music biz’s official weekly launch moment for singles and albums to Fridays across the world. There were some dissenting voices. Martin Mills, boss of Adele’s indie U.K. label group Beggars, questioned whether the initiative would “further cement the dominance” of the major record companies. Others argued that their qualms had been ignored; Martin Goldschmidt, the head of British label Cooking Vinyl, memorably remarked: “That was only a ‘consultation’ if the new dictionary definition of ‘to consult’ is ‘to tell to f*ck off’.”

Perhaps the gravest fear about the GRD, however, was that it would create a “gradual erosion of local music culture.” This concern was rooted in the idea that, with one unified release date, artists in individual markets would struggle to secure crucial promotional spots on the likes of Spotify, YouTube and Apple Music. This, it was posited, would subsequently disintegrate the strength of native artists, while inflating the planet-straddling power of U.S. pop behemoths.

It was a logical worry – but, as it turns out, an unfounded one. Because not only is non-English language repertoire dominating key individual territories today – it’s also taking over the world.

There is no better current measure of the world’s music listening tastes than YouTube (much to the music business’s fiscal annoyance). The service reaches more than 1.9 billion people every month – nearly half the planet’s entire internet-connected population. According to IFPI research, 85% of YouTube’s audience uses the service to listen to music, putting the platform’s current music-consuming reach at approximately 1.6 billion people.

Further IFPI data shows that, in 2017, 46% of all global music listening hours on streaming services belonged to YouTube alone – more than every single paid and free audio streaming service in the world combined.

In fact, Ariana Grande – currently breaking global records on Spotify – is the only artist in the entire YouTube Top 10 whose first speaking/singing language is English. (The rest of the Top 10, if you were wondering, is made up of three Puerto Rican artists – Bad Bunny, Farruko and Ozuna – plus one Indian, Udit Narayan, and one Colombian, Karol G.) This may surprise those of us who rarely step beyond an Anglo-American pop-cultural bubble. But, out in the big bad world, it’s been a long time coming.

Across the 12 months of last year, YouTube’s biggest music videos were led by two songs which were entirely in Spanish. Number one was the “Te Bote” Remix – by Casper, Nio García, Darell, Nicky Jam, Bad Bunny and Ozuna – whose current YouTube plays stand at 1.6 billion. The runner up was “X” by Nicky Jam and J. Balvin (current streams: 1.4 billion).

Looking at YouTube’s entire Top 10 biggest songs of 2018, eight were non-English language (all in Spanish) with only two songs in English: Maroon 5’s “Girls Like You” at Number Three, and Drake’s “God’s Plan” at Number Eight. The year before, in YouTube’s global 2017 Top 10, six tracks were non-English language (again, all in Spanish), led by Luis Fonsi and Daddy Yankee’s “Despacito” at No.1 – which remains the biggest video in YouTube history, on the cusp of 6 billion views today.

Go back another year, 2016, and YouTube’s annual Top 10 had just one non-English language placing – Nicky Jam’s “Hasta el Amanecer” at Number Three. And guess what? Completing the backward trend, in 2015, there were zero non-English songs in YouTube’s global Top 10. 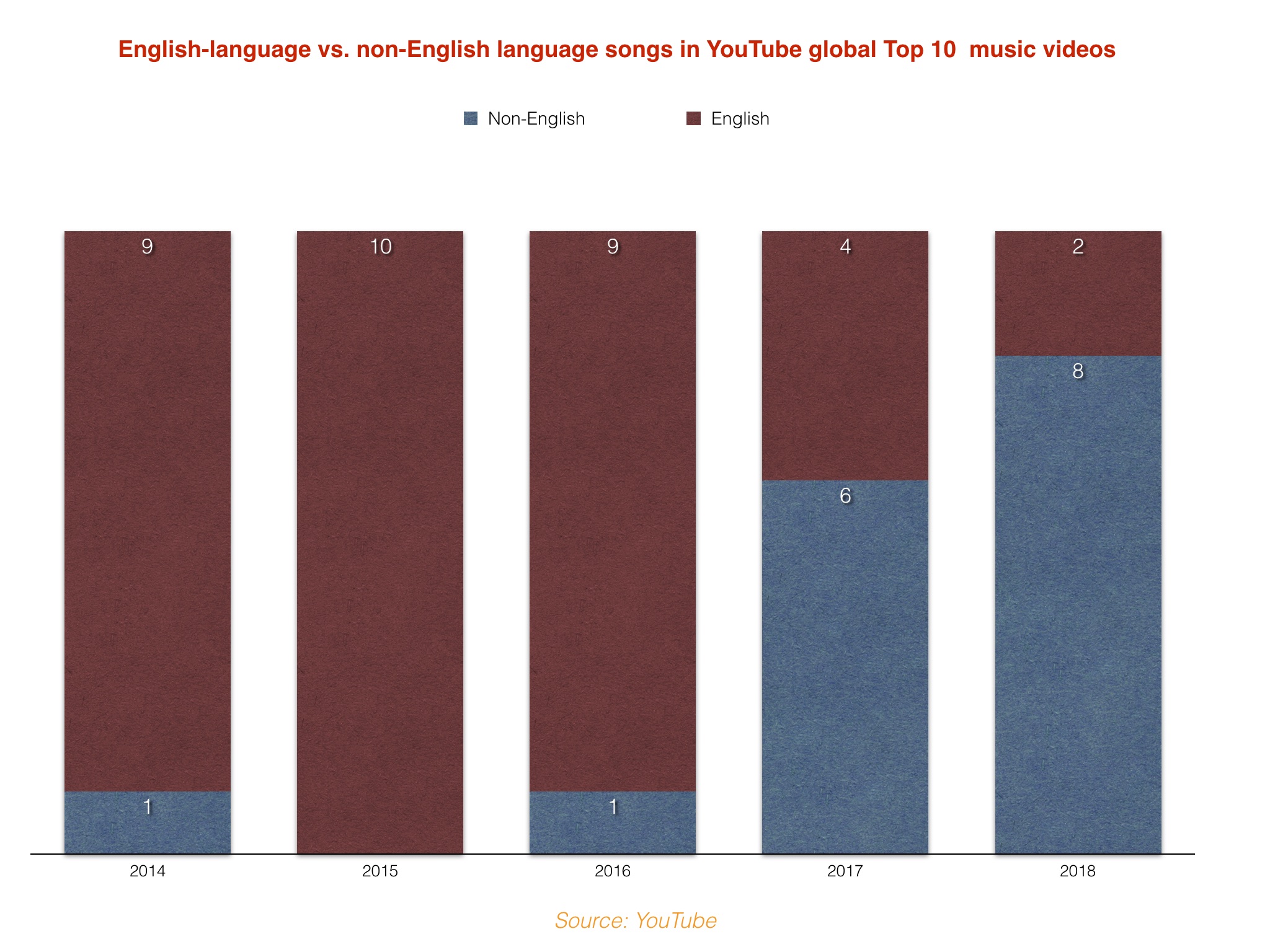 Spotify’s year-end listings don’t quite show the same global diversity as YouTube’s… yet. The biggest non-English language track globally on Spotify’s 2018 annual chart was “X” by Nicky Jam and J. Balvin at Number 18 – although Spanish lyrics did appear on Cardi B’s I Like It (feat Bad Bunny and J Balvin) at Number Seven.

An important stat: As of end of September last year, 67% of Spotify’s active users resided in the US, Canada or Europe. A further 22% were located in Latin America, with just 11% living outside these regions. Spotify is now corporately hungry for a more even worldwide spread of users – a goal which will increasingly benefit international artists on the service.

Things are already changing: according to streaming monitoring site Kworb, as I write this, the third biggest daily artist on Spotify is Anuel AA (behind Ariana Grande and Post Malone), while fellow Latin stars Ozuna and Bad Bunny also appear in the Top 10.

Which country will provide the next big story in non-English language music’s global ascent? A good bet would be India. Remember that Indian artists claim four of the Top Five spots on the current global YouTube most-played artist chart. The week before, they enjoyed a clean sweep of the Top Three.

Nielsen recently ran an analysis of the Top 200 most-streamed songs around the world in Q4 2018, across services including YouTube, Spotify, Apple Music and Amazon Music. The most-streamed song globally in the period, with all formats taken into consideration, was lyrically Latin: Taki Taki by DJ Snake, Ozuna, Cardi B and Selena Gomez.

The VP of Nielsen Music, Helena Kosinski, revealed at the NYLON Connect event in London last month that English language music made up 67% of this Top 200, followed by Spanish on 18% and Hindi on six percent. Bear in mind that this Top 3 doesn’t count other prominent Indian dialects such as Punjabi and Bengali. “The globalization of music is real.”

“The globalization of music is real,” Koskinski tells MBW.  “With the proliferation of streaming music services and unlimited access to international content, we’re seeing a third of the world’s top streamed music as non-English language songs with Spanish, Korean, Indian, and Arabic language songs gaining traction.”

Also bear in mind that, Apple Music aside, none of the biggest streaming music services monitored by Nielsen’s survey – including YouTube – are officially available in the globe’s most populous country, China. (This fact alone suggests than non-English artists may have already tipped the balance as makers of the world’s most popular music.)

Other factors also point to a particular, imminent explosion in Indian music. Spotify is expected to launch in the territory in the coming weeks, with a heavy focus on striking up relationships with local artists. The firm recently inked a global content licensing deal with India’s biggest label, T-Series – which also happens to be the owner of the world’s second largest YouTube channel, with over 60.5 billion plays of its videos to date.

Just as Latin artists and producers have been embraced by the U.S. pop/hip-hop industry –  while gaining the commercial confidence to speak, rap and sing in their native tongues – some now expect that Indian musicians will soon be granted the keys to the global hit-making machine. “One of the biggest composers in India has just signed a deal for 15 songs with a large international label, which will all be collaborations with top global artists.”

“It looks like 2019 is going to be a very big year for Indian [musicians] on the global stage,” Tarsame Mittal, one of the leading artist managers in India, tells me.

Mittal looks after the careers of acts including one of India’s most popular “playback” artists, Arijit Singh – who features on YouTube videos with comfortably more than a billion streams between them. “There are a lot of collaborations [with US artists/labels] already happening,” adds Mittal. He declines to name names, but reveals that “one of the biggest composers in India has just signed a deal for 15 songs with a large international label, which will all be collaborations with top global artists.”

(You only need witness Marshmello’s new Hindi-language track with Pritam, BIBA – released on JioSavvn’s own label – to see the potential here.)

Putting Spanish and Indian music aside – not to mention the chart-topping global rise of Chinese (Kris Wu) and K-Pop (BTS) stars, plus the increasing music industry investment pouring into Africa – there is other, more granular, evidence that English language pop is finding global dominance tough out there.

The rise and rise of hip-hop hasn’t just been a U.S. phenomenon; countries such as France, Italy, Germany and the Netherlands have seen a notable rise in local-language rappers – and their national-level charts have been materially affected. Take, for example, France, where, according to local market organization SNEP, no less than 19 of the Top 20 albums in the first half of 2018 (judged across streaming and sales) were by French artists. Sixteen of the 19 were classified as “French Rap.”

“The resounding success of Italian music in the streaming era, with such a high percentage [of popularity], confirms an important generational revolution in our country.”

Over in Italy, local record industry body FIMI reports that 29 of the market’s Top 30 albums of 2018 were by Italian artists. “The resounding success of Italian music in the streaming era, with such a high percentage [of popularity], confirms an important generational revolution in our country,” observes FIMI CEO, Enzo Mazza – noting that eight of the artists behind the market’s Top 10 albums last year were younger than 30 years old.

Mazza, in line with his job description, credits record company investment for catalyzing an “epochal change” in Italian music, driven by “a young generation of fans linked to new technologies such as streaming, smartphones and social media.” Judging by Latin and Indian music’s current stranglehold on the top end of YouTube’s global chart, this “epochal change” isn’t stopping at the border of any individual country.

The global music industry, alerted by the power of YouTube’s colossal worldwide audience, is obviously, inevitably, waking up to these statistics.

The above article originally appeared on RollingStone.com through here. MBW has entered into an ongoing global content partnership with Rolling Stone and Penske Media Corporation.Music Business Worldwide